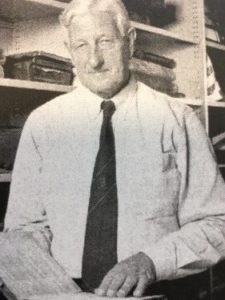 It is with great sadness that I advise the passing of our club Patron John Mulford. John passed away after a short illness.

Words cannot express what John is to our club. Not only was he the Patron of our club (2001-2016), but he was also a previous Club President (1982-1987), first grade player (1949-1952), and importantly a Life Member of DDRFC. John also was captain of the Red’s State junior undefeated Premiership teams of 1947-8, and the Combined State U21 team. He also became a first grade referee.

On a personal note, John has been a great mentor to both myself and previous Club President Colin Fleming, in steering our club from near extinction in 1995 to the club it is today.
John was the author of the Dirty Reds historical book “Men in Scarlet”. John also was the author of “Guardians of the Game – The history of NSW Rugby Union 1874-2004”.

I do not use the words lightly when I say he will be missed enormously by the Dirty Red community. May he Rest in Peace – a truly great DIRTY RED.

John’s funeral will be held on January 3rd 2017 at Macquarie Crematorium however confirmation will be posted in the SMH.